I am happy to announce the release of elm-review and its CLI.

elm-review is a tool that analyzes your project’s Elm code, and reports patterns that do not comply with a set of “rules”.

Let’s say that in your Elm project, there is a Ui.Button module, so that the project has a consistent UI for your buttons, and a better API for your use case to avoid pitfalls the team has too often fallen into. Also, in order to have a consistent color palette, there is a module named Ui.Color which contains all the definitions for the colors in your application.

The problem is that, sometimes these conventions are forgotten or were not well communicated, and problems appear. The native Html.button function gets used instead of the Ui.Button module, and colors often get redefined where they are used and not imported from Ui.Color. Sometimes, these get noticed during code review, but sometimes they don’t.

elm-review provides you the ability to write rules that make this code review automatic. The result could look something like this: 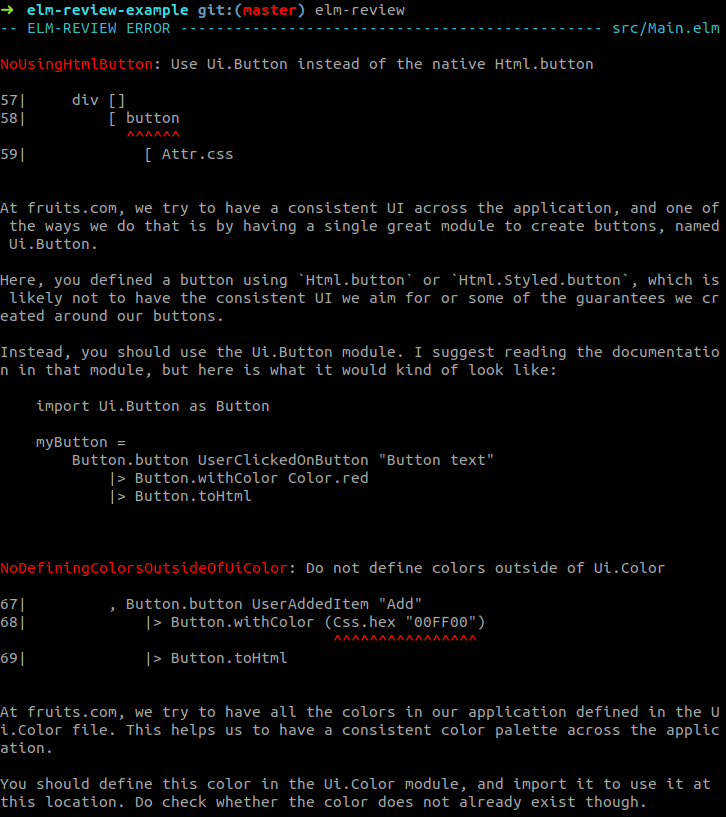 The recommended way to get elm-review is to install the CLI, available on npm.

You can also try it in an online version here, or you can checkout this repository that shows how elm-review is configured and used. The screenshot above was taken from this example.

A lot of static code analysis tools out there (for any language) provide a set of “rules” that you can enable and/or configure, but only some provide the ability to write your own custom rules. Custom rules can be a great tool to forbid things in your project, that are not possible with language constructs, in order to create more guarantees.

The button and color examples I have talked about before are not something that makes sense to be forbidden by the compiler, since the problem is too dependent on the project and the way the team works. Also, it is not possible to forbid this using APIs, even by using techniques like opaque or phantom types, because your API can not restrict the use of a data type from a different module.

Review rules are written in Elm. This means that you don’t need to learn a different language to be able to write one, and this also means that rules can be published and shared on the Elm package registry. You can go to the package documentation to learn how to write rules, where you can find a lot of rule examples that might inspire you to write your own to solve problems you have.

Even though elm-review can help you with enforcing a given code style, I recommend not using elm-review for this purpose. For most of the styling issues, we have elm-format. Also, though a review rule can be a powerful tool, it may not be the best solution to solving your problem, nor the first one to reach for. Other solutions, like API changes, should be considered first. I suggest reading when to write or enable a rule for more on that.

The errors reported by elm-review are meant to be as helpful as possible. They try to explain what the reported problem is, why the pattern is forbidden and how to improve the code so as not to have the problem, like what we are used to with Elm’s compiler errors. I don’t have full control over the details of the review errors other people will write, but this is what the API and the documentation guide towards.

In the previous example about forbidding the creation of colors outside the Ui.Color module, I would detail in the error message why we don’t allow colors to be defined elsewhere, and explain the steps on how to fix the problem.

Even though the functionality exists, I think automatic fixes should only be provided in restricted cases.

To help you write great rules, elm-review provides a testing module that works with elm-test that helps you test them in depth. If you’re interested, you can read the design goals for this module.

Unlike most static code analysis tools, elm-review comes with no rules included. That is because I do not want to suggest that some rules are best practices, and I wish for users to decide what is best for them.

Coming with 0 rules doesn’t mean that you need to write them all yourself. Instead, you can find some in the Elm packages, and a good way to find them is by using elm-search and searching for Review.Rule.Rule. I have published a few ones already: jfmengels/review-unused to find dead code and remove it, and jfmengels/review-debug to find occurrences of Debug code.

What are the differences with elm-analyse?

In the Elm community, we already have a similar tool: elm-analyse. The main difference between the two, in my opinion, is the ability to write your own rules. For the rest, there are plenty of differences but in the end they are quite similar.

elm-analyse currently has some great features that elm-review doesn’t (but maybe one day), like a watch mode, better performance (probably), better operating systems support (probably) and is integrated in some editors. elm-analyse also has useful features that elm-review doesn’t aim to have, such as indicating that a new version of a dependency is available or generating a module graph.

If you like elm-analyse’s rules and don’t need any custom rules, I suggest using it. If you need other rules than that, custom rules or ones available on the Elm package registry, maybe try elm-review. And nothing prevents you from using both!

I think that elm-review lowers the barrier to entry to the realm of static code analysis, thanks to a great API, and by allowing anyone to use a rule without the maintainer of the tool’s consent and effort. I believe that this will, in turn, make people create new useful and awesome rules for everyone to use. Here is a list of rule ideas that I have. Maybe these will inspire you with great rule ideas.

First of all, I would like to make sure that elm-review is working well and as expected, and that people are finding uses for it. I want to make sure that writing rules and testing them all have a great experience.

I also think that elm-review’s configuration API will need to change to accommodate exceptions, different rules for different folders (src/ vs tests/ for instance), but this will depend on the pain points that users will give as feedback.

Some of the things I then want to work on include:

I hope you will try elm-review and enjoy it. I spent a lot of time polishing these projects, but ultimately there are some edges where I need feedback from other users.

If you wish to talk about elm-review or send me feedback, hit me up on the Elm Slack (@jfmengels), or open a GitHub issue in the appropriate repository.

Thank you for reading!