I hinted at this coming in the last release, but NoUnused.Dependencies now proposes a fix for removing your unused dependencies. 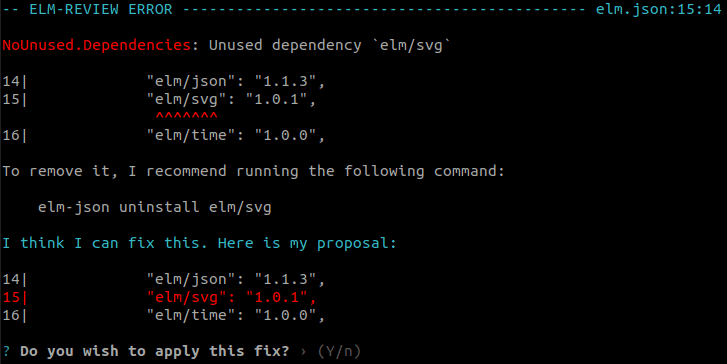 As you may have seen recently if you were a target of such a pull request or if you’ve read the announcement, Martin Stewart created a bot to remove unused packages from dependencies using Lamdera and elm-review.

Martin added the automatic fix for removing dependencies on packages, and I did it for applications. He also made the rule report unused test dependencies, so if you notice new reports for unused dependencies, don’t be surprised! Thanks a lot for working on this Martin!

In v1.1.5 in other posts that NoUnused.CustomTypeConstructors got a lot smarter and become able to report some constructors that looked used but weren’t.

In this version, the rule now proposes automatic fixes! 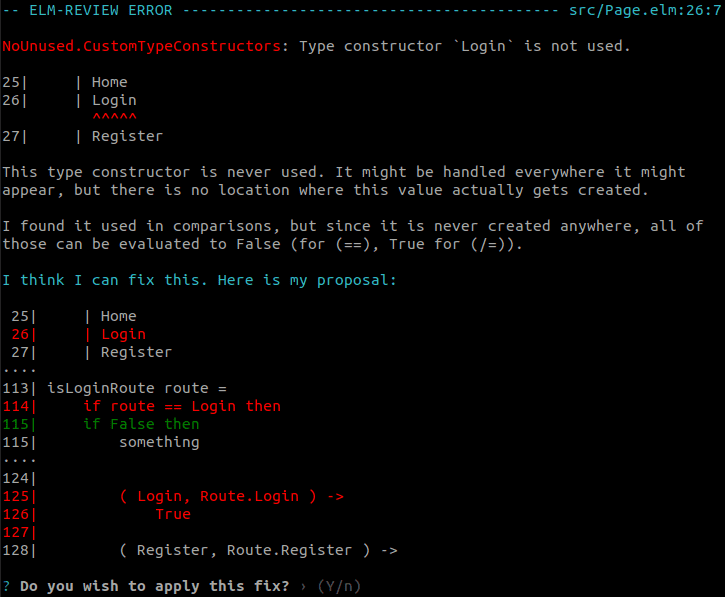 elm-review only supports fixes for a single file at a time, so you’ll see this if a constructor is only ever referenced or pattern matched in the file it was defined in.

The annoying thing with this, is that you may end up with code like the if False then, which seems kind of dumb.

Thankfully, this is not the end of the announcement 😀

Automatic fixes for… a lot of things

I’m releasing a new elm-review package called elm-review-simplify. It has a single rule named Simplify and its aim is to provide automatic fixes that simplify your Elm code.

Here are a few examples of what it does:

Just as a small piece of history for me: I used to write a lot of ESLint rules to make JavaScript code more secure and nicer, and I was very frustrated because we would not be able to tell some simple things with confidence, such as whether a.map(b => b) could be simplifiable to a. The linter and/or the language couldn’t be sure that the data was an array even when it very much looked like it because it could be an arbitrary or custom data structure with a map function that did something surprising.

I’m therefore really happy that about 5 years later I’m finally able to make these kinds of transformations with high confidence that it won’t break the user’s code. 🎉

The rule applies a ton of small iterative fixes, with the hope that it will break down seemingly complex code into simpler code.

Let’s take this code that I recently found as an example:

What Simplify would first do is to transform prefix ++ "" to prefix, because concatenating with an empty string does not change the value.

We then have if ... then prefix else prefix which gets simplified to prefix.

We end up with this:

I imagine at some point there could be a rule to remove or report this unnecessary prefix_, resulting in even less code.

At one point in time the code above used to have a purpose (it did prefix ++ " "), but as it changed it ended up not bringing any value, even though that was not clear at first sight.

If we go back to NoUnused.CustomTypeConstructors, here’s the kind of scenario that I tried to make nicer:

Should we notice that InTheGarden is never used (because you recently moved to a flat in Paris for instance), then NoUnused.CustomTypeConstructors will suggest this fix

Simplify will then take over and do

Now through the magic of tiny steps, we notice that the function does pretty much nothing anymore. NoUnused.Parameters will now report that items it not used, at which point (because that rule doesn’t provide an automatic fix) you might address the issue by removing the function entirely.

As discussed on the Elm Radio about elm-format, Dillon and I write terrible-looking Elm code, and let elm-format clean it up for us. Similarly to that, I want Simplify to be a platform that users and other rules can rely on to do the dirty work.

Similarly, this rule relies heavily on elm-format being applied after elm-review (which happens automatically 😉) because writing beautiful fixes is hard (again, fond memories of doing this in ESLint when formatters were not widely adopted).

Dillon and I also like to do work in tiny incremental steps, and that sometimes includes writing very dumb or hardcoded code, which Dillon presented well in his Elm Europe talk. It’s possible that we forget to make some code more general-purpose and therefore keep some of the hardcoded code in there. In this case, Simplify would report errors that would make us remember to finish the abstraction.

Just like all the NoUnused rules, having this rule trigger when you don’t expect it can be a sign that something fishy happened, like an unexpected bug. Applying the fix is not always the right course of action (Don’t accept fixes blindly!), and sometimes you have to go look at what change led to unused or simplifiable code and undo the root cause.

When applied fully, and as seen in an example above, I hope that simplifying code will lead to detecting unused code, which as I have described elsewhere can trigger a snowball effect of other code.

I know of some people wanting to be able to remove code like if IS_PRODUCTION then [code] else [code, devCode] from their production builds, where IS_PRODUCTION would be injected by a build script.

Running Simplify on the built Elm code could remove references to devCode and reduce the production build by a few kB by taking advantage of Elm’s dead code elimination (which would otherwise not kick in in this case).

In some cases, Simplify will make the code run a tiny bit faster because it will remove operations. I don’t think it will be noticeable though.

Thanks to the wide-spread adoption of elm-format, Elm’s small language and The Elm Architecture, Elm code in one codebase tends to look like Elm code in another codebase, and I’d like to make it even more so.

I have decided on some “simplifications” that takes code written one way and change it another that I think is more idiomatic in Elm. I think I have been pretty conservative and limited with my choices though. Here are a few things it does:

On that note, I don’t want the rule to be too annoying or restrictive in how people write their code though, and I want people to keep writing code in a way that makes sense to them.

Changing List.map f [ a, b, c ] to [ f a, f b, f c ] is also something the rule won’t do, because that could make the code longer or more annoying to write, even if in some sense it could be considered simpler.

Also, changing (\data -> fn data) to fn won’t be done, because good names can make the code more readable in some contexts.

I think most value of the value is removing the cruft that seems unnecessary, because that’s when you’ll detect bugs or unnecessarily complex constructs.

There will likely be a lot more simplifications integrated in the future. I wrote down a few I have already identified in an issue. Let me know if you’d like to work on implementing some simplifications!

Also, feel free to suggest new ones in new issues if you think of some. But please understand that if it’s too complex, too much work or something I don’t intend to support, I may not want to include it.

For instance, I still don’t know whether I want to support simplifications for packages other than elm/core or other elm/* packages, like the elm-community/*-extra packages.

Others could publish similar rules for those and we’ll see how that will evolve. Do get in touch with me if you want to contribute something similar to the community though!

Also, I put little effort into making nice and consistent error messages and details for this rule as the main use was to simplify the code, and not explain why some things are equivalent. But the rule could be helpful for newcomers if it provided better error messages. If you want to help out with the quality or consistency of those, please contact me!

I’d love for you to try out what simplifiable code you can come up and figure out whether this rule will find it!