Some weeks ago I released version 2.5.0 of the jfmengels/elm-review. It adds a feature allowing to get a portion of the source code as a string.

I’ll explain what it does and how to use it, and then introduce some cool newly published rules that the feature makes possible.

The new addition is withSourceCodeExtractor, which allows you to get an extractSourceCode function. It takes a Range (meaning a start and end position) and it will give you the source code in that range as a string.

For instance, if you have this source code:

then you will get this result:

These ranges are provided by the AST we’re using in elm-review, meaning you’ll rarely have to construct them like I did above.

Why do we need this? I thought we were using visitors to analyze the AST.

Yes, and we will still do that, as that is generally more practical and precise. The purpose of getting the source code is actually about allowing new kinds or improved automatic fixes.

Let’s take the example of a rule that forbids negative conditions in if conditions, and wants to provide automatic fixes. (Note: I actually wrote that rule as a test for this functionality, but I won’t publish it because I don’t think it’s a good idea).

Consider that elm-review fixes only work by doing string manipulations: inserting a string somewhere, removing a portion, and replacing a portion by a new string.

So what would a rule have to do to create a fix? It would have to remove the not and swap the contents of the branches. And that’s where things become really hard for elm-review, because one way or another you’ll need to move or copy a portion of the code at some point, which are not part of the available primitive fix operations. Try it out yourself!

A solution would be to stringify the AST corresponding to one of the branches using the-sett/elm-syntax-dsl for instance. That would work, but the formatting of the code might be different from before, and comments in the branch would likely be lost. This is generally not acceptable.

But… if we had a way to extract the source code and insert that somewhere, that’d be the same thing. And this is the kind of thing this new feature now allows.

Back to the example, what we could do is (example in code): 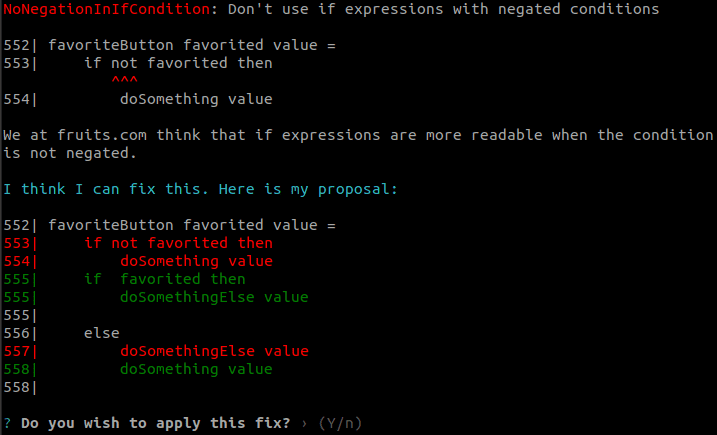 So what new rules are making use of this?

My favorite from this batch of rules is NoPrematureLetComputation, published in jfmengels/elm-review-common.

It reports and moves let declarations as close as possible to where they’re needed.

In the example above, we unnecessarily compute value if needToCompute n returns False. We might as well move that declaration to the “then” branch to avoid unnecessary work. 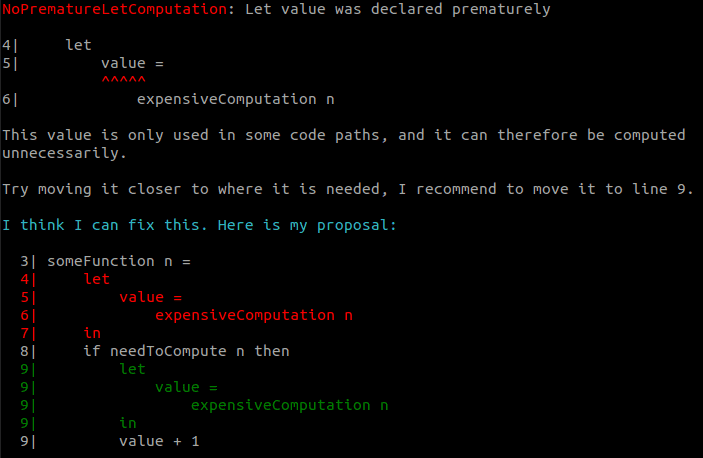 I believe this rule will make your code nicer by co-locating related variables, and improve performance by avoiding unnecessary work (at no cost).

Declarations will be moved as close as possible to but not inside functions (lambdas or let functions with arguments), as doing so could multiply the number of times the computation is done.

In some cases, you may not always see an automatic fix: When the declaration’s body introduces variables, then moving it can potentially result in compiler errors related to shadowing variables. As soon as the declaration introduces any variable, even if it will in practice not cause a problem, then no fix is suggested. But the rule will be made smarter over time 😊

Also note that applying the suggested fix is not always the right approach. Just like deleted unused code, sometimes the appropriate response is “this can’t be right”, and notice that there was a bug because a piece of code should have been used.

During the testing phase for this rule, someone used it to find a bug: A variable was recommended to be moved to a branch of an if expression, but in reality, it should have been used in both. I believe that this rule will allow you to find these kinds of issues if you don’t blindly accept the suggestions, but even if you do so, the code will be improved.

Again with let declarations, there is NoSimpleLetBody. This rule reports when a let expression’s body is a simple reference to a value declared in the let expression. This is somewhat of a stylistic rule, so I created a new package named jfmengels/elm-review-code-style.

In the example below, the value of the let expression is a simple reference to c which is declared in the same let.

I believe that we may as well move the contents of c to after the in keyword and omit declaring it, which is what the rule reports and suggests an automatic fix for. 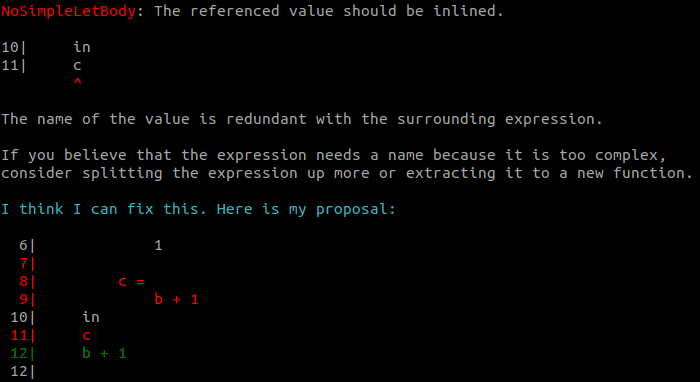 NoPrematureLetComputation will sometimes introduce this kind of code, so having a way to automatically clean that up is pretty nice.

I wrote this rule before implementing the feature to extract the source code, and I was able to provide an automatic fix by removing the in keyword and replace c = by the in keyword. However, this would not work if c was not the last declaration. So the new feature allows for providing an automatic fix in all cases.

I hope you like these additions! If you do, please consider helping out your local Elm maintainers (or asking your company to do so)!