I just released version 2.4.0 of the jfmengels/elm-review, and 2.5.0 of the elm-review CLI. The release of the Elm package contains some missing features that could be considered core to elm-review, and that will be useful to people who writing review rules. The focus has mostly been on reporting errors.

Starting from v2.5.0, the CLI will require jfmengels/elm-review v2.4.0, which in turn also silently requires needs the latest version of the CLI, so you should update both of these at the same time.

In elm-review, all errors are tied to a location in the project, and more specifically to a file (an Elm module, elm.json or the README) and a position in the file (where you’d see the squiggly lines). Pointing to a specific location in a project is really useful for users to quickly go to the indicated location and fix the issue.

Unfortunately it does not always make sense to point to a specific location. For instance, what if a rule is expecting a module or a function to exist somewhere in the project (a main function for instance, or something that the user provides as part of the configuration) and that can’t be found? Well you can’t point the user to the main saying that it doesn’t exist. There’s no specific location to point to.

In Safe unsafe operations in Elm we created a rule that takes as part of its configuration the name and module name of a function, which we would handle differently. In that article, we mentioned the problem that if the function could not be found, we would create an error for the elm.json file, because that’s the best we could do, though it was still kind of confusing.

To resolve this problem, 2.4.0 of the package adds a way to create global errors, which are by definition not tied to a location in the project.

Global errors are easy to create, but they are also less helpful to the users, so they should be used only when other errors are inappropriate. They don’t allow for automatic fixes either.

Testing rules is also part of the experience of writing review rules, that’s why there are new functions to assert that the rule behaves as expected.

In addition to global errors, we are introducing configuration errors. These are errors that will be the result of parsing or validating the arguments of a rule, and noticing a problem with those.

Since the configuration is written in Elm, it gives a good experience to the user when the compiler is the one reporting configuration errors, which rule authors can do by custom types for instance.

That said, it is not possible or practical to validate everything only with that: Positive integers, strings with certain shapes, non-empty sets/dicts, lists without duplicate items, etc.

For instance, imagine you want to have a rule that forbids nested case expressions up to a certain threshold (not saying I’d want this, but it’s a fine example). If the threshold is not something that you think is reasonable, you can report a configuration error like this:

Without a configuration error but with global errors, authors would have to create a dummy rule, with a visitor and that reports a single error, or add a lot of conditionals in every visitor.

In practice, a configuration is almost that: a dummy rule that reports a single error. With the side-benefit that the elm-review CLI will abort early and report the configuration errors before reviewing the entire project. So the feedback is a lot faster, which will be useful on large projects.

Again, there are dedicated tools to assert that the rule reports a configuration error.

While we’re on the subject of test dependencies: a common complaint from rule authors was that it was hard/tedious to create tests where the project had dependencies, even if the dependency is something as core as elm/core (pun barely intended).

That’s why I’m introducing a few new functions to help with that. I added 4 pre-built dependencies to the package in a new Review.Test.Dependencies module: The three packages that contains operators (elm/core, elm/parser and elm/url) and elm/html (which I thought could be useful). If you need to test with a different dependency, I added instructions and a script to generate Elm code corresponding to the dependency.

I also added projectWithElmCore which is just like the existing Project.new but with elm/core already added. Also, elm/core is now added by default to all tests (unless you use runWithProjectData).

With these changes, I could remove almost all custom dependencies I set up in my own tests, so I think this will be nice quality of life improvement for everyone else.

You may know that elm-review looks at elm.json and allows reporting errors for it if you’ve ever seen a report saying you had unused dependencies.

Even though it was possible to report errors for it, it wasn’t possible to provide fixes for it. Using Review.Rule.errorForElmJsonWithFix, it is now.

One thing we’d like to use it for is for automatically removing unused dependencies, which would look something like this (work in progress): 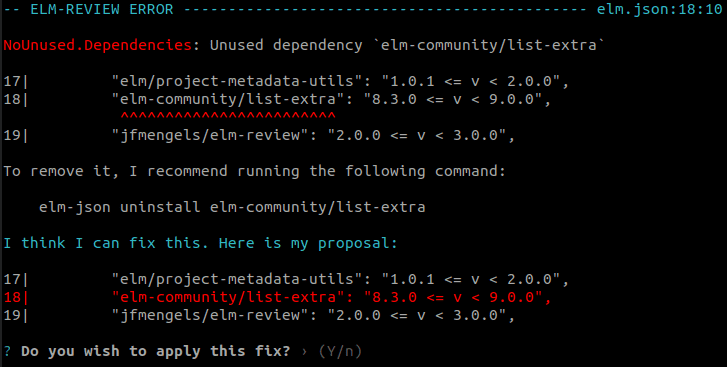 The CLI has two new flags, --ignore-dirs and --ignore-files. These will be especially useful when running with --template.

In your local review configuration, you may have ignored some directories or files, for instance the directory for generated code. When you use --template (or --config), you’ll use a configuration that will not have those exceptions.

To remedy that, you can call elm-review with those flags, that will add additional directories/files to be ignored.

When you run elm-review --fix-all and there are a lot of errors, it can take quite a while to finish and it may look like elm-review will be hanging or doing nothing.

When elm-review applies more than a certain number of fixes and to comfort the user in the idea that something is happening, it will display a message saying that it is doing work!

I will probably tweak the message some more later, but at least knowing that something is happening makes for a much better experience.

elm-review new-package now comes with a elm-bump script. It’s a nice utility to prepare for the next version. You can now publish a new version like this:

And there you go! Once the tests in CI pass, a new version will be published. elm-bump runs tests, run elm bump, update links in your documentation, and update the example/ configuration.

Not having this has caused me quite a few disappointments because I would often forget the last step. Thankfully, the problem gets caught in the CI, but this new workflow feels a lot nicer to me.

That’s it for this release! As usual, there are other small changes or fixes, but I think these highlights were already a long enough read 😁

I hope you find this interesting! If you want to support me or elm-review, you can do so through GitHub sponsors. Even using it, blogging about it or help me think through features is very much appreciated!