If you’ve written a little bit of Elm code, I hope you’ve tried out elm-test which allows you to write and run tests for your Elm code (if you never heard of it, we talk about it on the Elm Radio podcast). A test looks like this:

The assertion, or “expectation” as is the naming choice of this library, is provided by the Expect module. It contains functions like equal, notEqual, lessThan, true, etc.

These are often enough when the scope of the test is small. Sometimes (to me) it makes sense that the test is a bit more thorough and that it makes multiple assertions. To do that, you’ll want to use Expect.all:

What you may notice when you start making multiple assertions, is that the error message can be pretty bad.

One reason that Elm developers love Elm is because of the great error messages that the compiler gives us.

In comparison to that, the error message we got from elm-test was lacking in helpfulness. If we only had a single assertion that would be just fine, but when we multiply the assertions, that becomes a problem.

What if I told you your error messages could be just as great as the compiler’s?

So let’s change this assertion to be much easier to understand, by rewriting the assertions using simple conditionals and the Expect.pass and Expect.fail functions.

Let’s go through what is happening here.

We make the assertion manually (String.length str > 16), and then based on whether that condition passed, call either Expect.pass or Expect.fail. Expect.pass is an empty assertion that will always be considered as passing. You want to call this when you are in the happy path and you have nothing more to assert. Expect.fail is an assertion that will always fail with the given error message.

This is a lot more verbose, sure, but look at the result of the same test with our new test code:

This is much more helpful for the developer who is working with the test, or even for a different developer who runs into this test failure. It’s up to you to choose how you want to format the error message and what information you want to include.

You can achieve the same result without using Expect.fail.

A second way would be to use Expect.true / Expect.false since they also allow adding a custom failure message.

A third way would be to use Expect.onFail:

In practice, my personal preference goes to Expect.pass / Expect.fail because I find that conditionals read pretty nicely, partly because the condition is always at the top and because they are in a very familiar code construct. I also don’t have to transform my code to use assertions where they don’t fit well, for instance when doing pattern matches.

Also, performance-wise, I can compute the error message only when a problem has been noticed. The most common path (that should be optimized for) is when the tests pass, so I prefer to only add performance hits when necessary. In practice it is rarely a problem, but there are cases where computing a nice error message can be a bit expensive. Multiply that by the number of tests you have, and that can take some of your precious CI time a bit.

elm-test supports adding colors to error messages using ANSI codes. Instead of doing "TITLE -- bla bla", we can add special character sequences to add colors to our texts, like "\u{001B}[31mTITLE\u{001B}[39m -- bla bla", and now a part of our message shows up in red!

You can find what is possible with ANSI codes on the Internet.

I would advise using helper functions like these because the code for the assertions becomes hard to read otherwise.

Note that elm-test always indents the failure message by 4 spaces. Just thought you might want to know that.

Some people advise to have one assertion per test. I agree that when that makes sense that can often yield a better test debugging experience. In those cases, using the default failure message is perfectly fine.

When the failure reason becomes cryptic and you notice it’s often a debugging time sink, you might want to rethink how you wrote your tests, and potentially use this technique to make the failure clearer for the next person who will run into the same errors.

I came to know about this subject by working on the testing module for elm-review. elm-review provides a nice API which prevents you from making a mess out of your review rules. While that is enough to give a good experience for the one developing the rule, it is not enough to ensure a high quality for the user of the rule.

To help raise that, elm-review gives you access to test helpers to make testing rules a breeze and make sure that the rule does what you expect. Also, elm-review has opinions on what makes a good rule, in particular around the error message and the location of the error message, which I’ve written extensively about in the module’s design goals.

Its test helper runs a multitude of checks for you, and tries to report problems with clarity and enough context so that you can easily resolve the problem. My aim was to be as helpful in the testing phase as the Elm compiler is during the compilation phase. From feedback, I feel like I’m allowed to brag a little about the result 😊

Here is an example where I had to be fancy with colors to make a specific problem around whitespace easy to resolve. 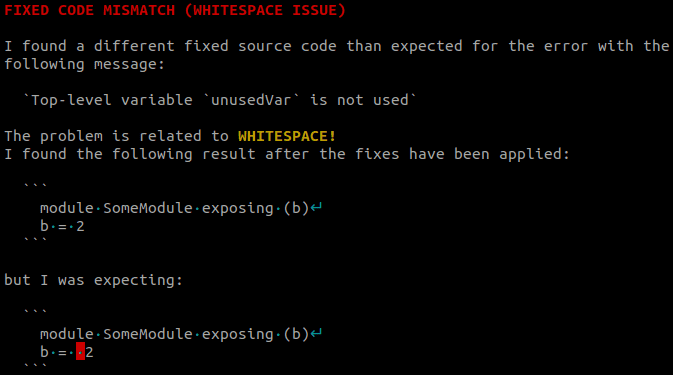 You can go read the file containing the possible error messages or the test module itself if you’re curious.

I believe that when you’re working with a framework/platform tool like elm-review, you should have the means to test your code extensively. As a library author, it’s not a small task, but it feels so worth it in my experience.